What follows is a rant that was written near the end of a minor thread on allowing U.S. Military Recruiters to visit public schools. I've made a couple of minor changes to improve clarity, and to correct an error of omission in citing, but the content of the rant is as originally intended. Enjoy. Or don't.

I'm putting this here as a placeholder; this should be populated with more useful information in the near future, but this'll give you a small taste of some of my thoughts on life. For the clue-enabled among you, that is.

If you have any feedback, feel free to fling it at this target zone.

All the folks that want to kick recruiters out of our schools have lived under a curtain of security so long that they dont know what the price of the freedoms that we enjoy are. They have forgotten that freedom must be defended by the willing. When US Armed Forces recruiters are kicked out of the schools that recieve Federal Monies to stay open, then we as a people are no longer willing. Then we will have become so soft as a people that the price we have paid, and some continue to pay, is too high. That will be a sad day indeed because it will mean the end of the great experiment known as the United States of America.

The ongoing pussification of this country, which started c. 60 years ago, has brought us to the sad state of affairs that is generally recognized as our 'Culture.'

I think any person of below-average or greater intelligence, with any degree of education, would agree that things aren't working as well as they could. There are myriad symptoms of the underlying disease, ranging (IMNSHO) from the appalling state of education (primary through college), the painfully large number of franchise-holders that refuse to exercise their civic rights and perform their civic duties (news flash! With rights come responsibility!), to the frighteningly large number (possibly larger than the previous group) of franchise-holders that do exercise their rights, but without any real knowledge of why they are voting in the way they choose. Far too many make their decisions based on 15-second sound bites and 30-second television commercials, without bothering to research, learn or understand the issues.

The above list could go on for pages, but I'll distill it to some of my favorites among our warts: The bloated, ponderous bureaucracy that infects our government; the phenomenon of the 'Career Politician,' (which, if you've read anything written by the Founding Fathers, you know was never their goal); Microsoft, the RIAA and the MPAA; the near complete breakdown of things like common courtesy and human decency. The fact that it appears that "the American people have lost their willingness to fight and die for their country ..." (--R.A.H.)
Honesty is no longer a virtue, and in many cases could get you hurt, or at least get the other guy hurt.
Personal Responsibility? What's that?
Entitlement? Goddammit, I deserve it, give it to me!
Why should I have to work for a living? You don't need to take the Pauper's Oath in order to go on Welfare.

The National Debt, as of the close of FY2005 (30 September 2005), is $7,932,709,661,723.50. That's seven trillion dollars. Actually, almost eight trillion. Fully 75%* of the population of this country doesn't even understand what one trillion actually means. The human brain really isn't wired to count that high. Here's a brief example in another form. One Trillion seconds (note: one trillion. The debt is 7.932 trillion.) is 31,688 years, 9 months, 5 days, 8 hours, 6 minutes and 42 seconds. That far in the future, the Pole Star will no longer be Polaris; precession of the equinoxes will have moved Alpha Cephei to that position. If you believe in creationism, or more specifically Bishop Usher's chronology, that would take you back in time roughly 25 thousand years before creation...
(FTR, if you doubt my numbers on the debt, check out this interesting stuff from the U.S. Treasury Department.
Any knowledgeable professor of Astronomy ought to be able to help you through the details of that nasty celestial mechanics stuff).
*{I'm just guessing at the 75% figure. If anything, I believe it to be conservative. If you have hard data on this, please share it with me, I'd love to know.}
[I owe much to RAH for the background on this part of the rant; I was slightly drunk and very tired and cranky when I wrote it, and the stuff just came to me ... I know that it's heavily influenced by a rant of his that is printed (among other places) in "Expanded Universe."]

That treasury department link provides some interesting reading. Especially if you were to plot those points in the Cartesian system, it provides some fascinating insight. The conclusion of this I leave as an exercise for the reader.

Our problems are not insurmountable. We're on the ropes, quite heavily, but we're not down, yet. These problems can be fixed, but it would take political 'leadership' that is willing to make unpopular decisions, it would take our general population growing enough sack to accept the tough and unpopular decisions as necessary, and it will take a lot of hard work, dedication, blood, sweat and tears.

I fear that, currently, our population lacks the intestinal fortitude to do what's necessary. Instead, the Plebs have discovered that they can vote themselves Bread and Circuses, and have been doing so for quite some time.

My plans for the future: A well-stocked gun safe, and a wheelbarrow to move those stacks of million-dollar notes around; keep in mind that near the end of the Weimar Republic, they were printing 5,000,000,000 DM notes (that's five billion). A wheelbarrow full of these might buy you groceries for a few days. Many people found their money more useful as a source of heat. (Paper burns, you know). 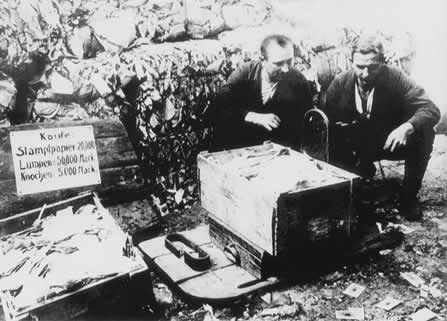 1923:Selling money by weight at the height of hyper-inflation. Paper money is worth more by weight than old bones... but less than rags.

wow. you made it. congratulations, here's a cookie for you.